An interview with screenwriter Sean Corrigan regarding the Cinequest Writing Competition. 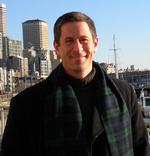 Sean Corrigan
Q: What's the title of the script you entered in this contest, and what's it about?

It was the Grand Prize winner in the teleplay category of the 2015 Cinequest Film Festival.

LOGLINE: The FBI recruits a young man with paranormal powers to thwart a domestic terrorist threat.

A: I wanted to find a screenwriting contest that was associated with a film festival. The networking and camaraderie that you glean from a film festival forum is as important as the screenwriting contest itself. Meeting other artists and sharing in their journey is an inspirational spark that I really needed. And San Jose is a great city, so I was really hoping to make the finals and get a free festival pass!

A: This was one of the finest run film festivals that I have experienced. I have lived in Austin for 25 years, so I have a pretty high bar with the Austin Film Festival and SXSW in my backyard. The Cinequest Film Festival is embraced by the San Jose community, with so many welcoming volunteers serving the festival.

All 10 finalists in each category were awarded an "Artist Pass" that gave us 100% access to all films; we could meet daily at a private artist bar with free Red Bull, regional wines, snacks, and Tito's Vodka; and there were (again free) nightly catered mixers at local restaurants, bars, and a biergarten. The winners received a beautiful customized glass award, Final Draft software, an InkTip membership, and a generous cash award. Cinequest delivered everything immediately (I received my check at the conference). I accepted my award on stage at the majestic California Theatre in front of hundreds of people, five minutes before Lawrence Kasdan spoke. It was an amazing experience.

A: I wrote my first draft in about seven weeks. But, there was a thread that was missing, and I couldn't quite figure it out, so I put it away for almost a year, and then came back to it with fresh eyes.

I am constantly rewriting and updating, so there really aren't "drafts" per se. But, there is a significant difference in my original version and the newest version that I submitted to Cinequest.

A: Unfortunately, no. With my job, I work on large projects that dominate my life for 6-8 weeks at a time, whereby I simply do not have the time to write, or if I do, my creativity has fizzled by the end of the day. This is going to change soon. I simply am a better writer when I write everyday.

A: No. I have too many stories and have had too many crazy experiences in my life. I have outlines for 30-40 screenplays or teleplays. Certainly, I write better some days than others. But, I will run out of breath before I run out of material.

A: I graduated pre-law from the University of Texas in 1995, and decided to forego law school so that I could pursue this ridiculous dream of being a writer. I currently work in publishing to pay the bills.

I have written thirteen screenplays, although only five are good enough to show by my current standards. I have written several teleplays and have had three plays produced in New York. I have been a semifinalist or finalist in 35 contests for a dozen different screenplays/teleplays/plays. I have won two Grand Prize awards in the last five months; a feature called "Confession" in the Cynosure Screenwriting Competition, and now the Grand Prize for my teleplay "Awareness" in the Cinequest Film Festival. I am a SAG/AFTRA actor and I have also directed a feature film called "Insignificant Other".

A: I live in Austin, but I plan on selling my home this summer and moving to L.A. by the year's end.

A: Right now I am looking for a literary agent (hint, hint: Sean-Corrigan@mail.com). I have won two Grand Prize awards for two different scripts in the last 5 months. After 20 years of amateur writing, the stars are finally aligning and it's my time to earn a living as a writer. I plan on selling my Austin home and moving to L.A. by the end of the year.

I am almost finished with a television comedy pilot, and then I am starting a new feature.