Compete in Your Own Genre! 6 Genre Winners will receive $1000 cash each and one will be selected as the TRMS Grand Prize Winner for a career changing table read experience and receive passes to the Austin Film Festival and Writers Conference this October. Currently accepting Horror/Sci-Fi, Action/Adventure, Mystery/Crime/Thriller.

An interview with screenwriter Paul Corricelli regarding the Table Read Writing Competition. 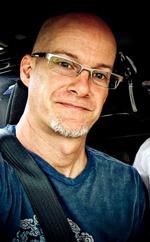 Paul Corricelli
Q: What's the title of the script you entered in this contest, and what's it about?

A: Inked in Blood.

It's the story of a unique and tortured young man who returns to the town he ran away from as a boy, to exact his revenge on all those who wronged him.

The story of his tormented past is uncovered as confronting each victim brings new horrors to the surface. One by one he will make them pay, until the one man responsible for his suffering pays-his father.

Inked in Blood is dark and gritty. The main character is a tattooed Albino. One side depicting images of Heaven, the other side Hell. Although there is NO religious message in the film, the tattoos play a big part in the look and feel of the story.

A: I was very satisfied with the results and received all the award promised.

A: I wrote it straight through in about six weeks. I made a few minor changes and submitted it to a few contests without much success. In 2012 I did a much bigger rewrite and began getting good response. I did write a very broad outline before I started writing. I wrote four drafts.

A: I used Final Draft, and still do. I've used Contour and Scrivener. I'm not the most organized writer, so the software helps me keep things moving. It is also helpful when coming back to an idea some time later.

A: I try and write for two hours a day when I'm working. If I'm off work I try and work four to six.

A: Yes, I do. Sometimes I revisit past script ideas. If that doesn't work I will make up a few characters and just write dialog. I wrote a sequel to inked in Blood a few years ago when I was blocked, and since I was familiar with the characters, it got my writing.

A: I actually work in the film industry,(not as a writer). I wrote the above mentioned sequel to Inked in Blood. Also, a Super Hero screenplay, a Zombie western (short) and I am currently rewriting an Action script that I wrote several years ago.

A: Yes I am. As I continue to try and make something happen with "Inked", and my newest screenplay, Super Humans, I keep writing.