We'll Bring the Festival Experience to You!

We'll Bring the Festival Experience to You!

An interview with screenwriter Stuart Land regarding the Table Read Writing Competition. 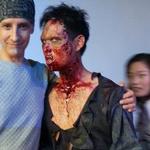 Stuart Land
Q: What's the title of the script you entered in this contest, and what's it about?

A: Todd McCoy's Adventure West won 1st place in the Action/adventure category. It's about a selfish NYC street-urchin who's thrown from a train in 1872 Wyoming when he discover something nefarioius. He's suddenly faced with rivers, trees, Indians, mountain men, and kidnappers. He finds his true self by losing everything, and then puts his life on the line to save his friends.

A: I liked the idea of going to Sundance and having actors read my script. I haven't seen snow in over 15 years, I miss skiing. I entered this script in two other contests. One had three reader: two liked it, but one didn't, so it didn't move up. The other is still in session, but I've placed as a semi-finalist so far, with results due in March.

A: So far they have honored all their prizes, but they're spread out, so won't know for another few weeks. Mostly I'm interested in who they showed the script to.

A: Well, if you count waiting time, it took eight years. I pitched the initial synopsis at a conference eight years ago and everyone loved it, but said it would never get made because it starred a 12-year-old boy, and was a period piece. Stupidly, I listened to that nonsense and put off writing it for all that time. When I got back to it last fall, it took about six weeks to write and polish. I might add, that I understand structure quite well, and decided to structure the story from a different logic than "Save the Cat." Apparently, some people get it, and some don't.

A: I wrote this, and all my screenplay in Movie Magic Screenwriter. However, this contest awarded me Final Draft, so maybe I'll give it a try.

A: When I'm in writing mode, that is, working a particular project, I write every day, 6-15 hours, seven days a week.

A: Once I'm writing, luckily, I don't get writer's block, mainly because I allow my characters to tell the story, not me. Sometimes it takes me a while to get going initially, doing all the research and such. I teach writing, and when my student complain of writer's block, I tell them to stop trying to write for the characters, let them write for themselves. Every action and reaction, whether dialogue or situational, is a result of conflict where one character wants something, and the other character wants essentially the same thing. Only one can triumph. Approach writer's block as as a confrontation where there are countless ways to obtain your goal. Let your characters battle it out. You stay out of the way.

A: I've written 18 screenplays, and 8 published novels, along with a few TV hour-longs, and spec series, short stories, and poems. I've optioned some of my scripts and sold one to China last year.

A: I've lived in LA before for many years. I'd be happy to visit, but in this day and age, I see no reason to move back there. Of course, I might be persuaded with some nice digs in Malibu.

A: I'm presently writing the third book in my ORIGINAL BLOOD vampire series. You can find all my books on Amazon. I'm also scripting a romantic comedy.