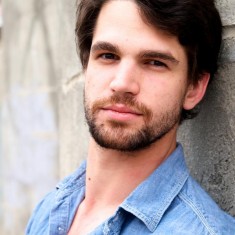 For 27-year-old Mark Stasenko, 2015 has been a very good year. First he was named the Grand Prize Winner of the American Zoetrope Screenwriting Competition for his screenplay Continuum, then he won a coveted ScreenCraft Fellowship for his script Losing Touch. We caught up with Mark to discuss his writing and the impact of these contest wins on his fledgling career.

HollywoodIQ: Mark, how long have you been writing? Did you go to film school?

I wrote a novel in 6th or 7th grade. I think it was basically just a collage of a bunch of Hardy Boy books I liked at the time, but that was my first real dive into writing. A few years later I read KISS KISS BANG BANG and realized that screenwriting is a ridiculously awesome way to tell a story. I knew I wanted to do that. I didn't go to film school. I studied Mechanical Engineering, so I have a unique perspective from a lot of other writers, which is a nice advantage when I'm pitching. If there's no wrong way to eat a Reese's, then there's definitely no wrong way to become a writer.

HIQ: Do you live in Los Angeles?

I moved to LA about 3 years ago and I plan to die here many, many years from now unless love takes me somewhere else (and even then I'll be back every month). I love LA. I've lived in Pittsburgh, Chicago, Minneapolis, and Los Angeles in my life and the transition to this city could not have been easier. You can write from a blimp over Moscow, but you can only sell in one beautiful, mountainous little slice of paradise.

HIQ: Let's talk about the Zoetrope contest. What kind of impact did that contest win have on your career?

I won Francis Ford Coppola's Zoetrope contest with a script called CONTINUUM. It's like MEMENTO with a lot more guns. It's a real honor that Francis Coppola connected with this script and chose it as the winner. It's one of those contests that is nice to talk about in rooms because people have heard of this Coppola character and they seem to like some of the stuff he's done, so when they hear he loved my script I've got their attention.

HIQ: What drew you to submit to the ScreenCraft Fellowship? Had you entered any of their genre competitions?

"Another thing to remember is that not everyone will love your script. If you enter 2 or 3 contests and don't make the quarterfinals, don't despair."

I entered CONTINUUM into their Thriller competition, I think. It made quarter or semis or something; it didn't win. But you know that's how it goes. Not everyone loves every script. It's sincerely exciting to win Zoetrope and Screencraft, but there were plenty of contests I didn't win. I read at some point, "Don't let success go to your head and don't let failure go to your heart," and I lean on that idea to keep everything in perspective.

I entered the Fellowship because I had won a few other contests and nothing really happened. I got a few bucks, some software, some hardware, and that's about it. I knew if I won this one, I'd get meetings. I think getting at least one meeting is important for a contest to offer. Who knows what that one meeting could become? The only thing I know for sure is that no meetings turn into nothing.

HIQ: What's the title and logline of the script you submitted to the Fellowship?

The Fellowship script is called LOSING TOUCH. It's James Bond in devoted love and on excellent acid. It's different from a lot of what I've written and to me it is really about following your own dreams to find happiness. While no characters are writers, no one is based on me, and the story is very elevated, ultimately it's a story about me becoming a writer with a lot of guns. That seems to be my thing, take something I like and just give it more guns.

HIQ: How has your Fellowship year gone? Who have you met, and what kind of advice have they offered?

The Fellowship was awesome. We met with something like fifteen or more mangers, producers, and agents during the fellowship week. While the advice was interesting, I learned the most from being in the room and watching firsthand what kind of things industry players were responding to. Nothing is as valuable as experience and the Fellowship was ripe with experience.

HIQ: We understand you've signed with a management company. How has that gone? What kind of impact has that development had on your career? What kind of working relationship do you have with your manager?

I signed a few weeks after the Fellowship as a direct result of the Fellowship. I can't thank the ScreenCraft guys enough for that.

Being repped at a major company is incredible. My manager has perspective, relationships, and experience in the industry that has been incredibly helpful. He has helped my career in powerful ways. I'm sincerely thankful, lucky, blessed, and so much more to have connected with someone who gets my voice and is committed to my career.

HIQ: Has working with a manager changed the way you write, or the kind of things you write?

I write a lot more pitches and treatments now and far fewer screenplays. In some ways I've transitioned from being a writer to being a salesman. Now producers trust I can write excellently, they want to hear my ideas and how I'd approach a story.

HIQ: Will you be entering any more screenwriting contests in the future? Do you have any contest-strategy advice to offer writers trying to establish themselves?

I always entered with the goal of getting representation. Now that I have that, I'd have to decide with my manager if it would be beneficial to continue. Right now, we're juggling a lot of stuff, so I probably won't be specing anything for contests in the immediate future.

I could write 15,000 words on contests. I think they're incredibly important. They're an infrastructure for making sure that great scripts are still getting noticed, no networking necessary. I'd recommend all writers without reps enter contests. I'd suggest entering really established ones like Nicholl, Page, or Zoetrope, or ones that guarantee meetings like ScreenCraft, WeScreenplay, ISA Fast Track, and many more. Also I have to mention, I help run the WeScreenplay contest, so I'm biased on that recommendation.

Another thing to remember is that not everyone will love your script. If you enter 2 or 3 contests and don't make the quarterfinals, don't despair. On the other hand, if you enter 7-10 and don't make the quarterfinals, it's probably time to rewrite that bad boy a little before submitting again. 99% of the time writing is a lot of work. 1% of the time it's the most incredible thing ever. The good news is, if you put in the 99% the 1% makes it all worth it.

Follow me on twitter @mstas1 and we'll continue the dialogue on writing. I'm just getting into this whole twitter thing, so I'd love to connect with writers out there. We're all on the same mission to tell great stories and we've got to work together to make that happen.