Craig Peters studied theatre at Stanford and UC Riverside, then moved to Los Angeles and slowly made the transition from acting to writing. His horror screenplay The 49th Day was selected for the prestigious "BloodList", an annual list highlighting the top 13 most well-liked, unproduced horror scripts of the year. The 49th Day was also named the 2016 winner of the ScreenCraft Horror Screenwriting Competition.

MovieBytes: Craig, what's your background? Have you studied screenwriting?

Craig Peters: I've never taken a screenwriting class - I just read a couple of books and took the plunge. As I have a strong background in performance, I tend to write like an actor, playing all the parts as I go along. I always start with the characters' motivations, asking the basic question, "What does this character want?" Then I set up conflicts and let it rip from there.

MovieBytes: Tell us about your script ... what's the logline and premise? 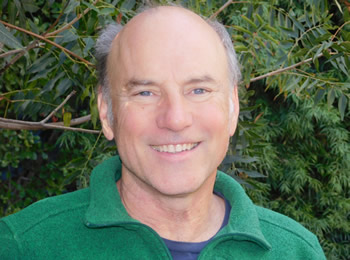 CP: "A young girl's imaginary friend starts killing her family off, one by one. But what can you do when you're only nine, and Death wants to play?" In The 49th Day, Diana, a clairvoyant child with a vivid imagination, makes a new friend, a specter of Death only she can see. When her loved ones start getting killed, she realizes that her new friend is responsible for their deaths. Diana tells her parents what's happening, but they're convinced she's losing her grip on reality. So Diana is forced to take Death on, face to face, in a desperate attempt to save the rest of her family. How many people spar with Death and live to tell the tale?

MovieBytes: How long did it take you to write the script?

CP: I started this script about 15 years ago when a friend of mine got run over by a bus, and it was my way of dealing with his death. It's been through myriad drafts, too many to count. My biggest challenge has been staying true to the core of the story and deflecting some of the suggestions and criticism that could have led the script astray. Though I've received invaluable guidance from many people who have read the script, I've never let anyone (no matter how well-intentioned) hijack my vision.

MovieBytes: Do you consider yourself a horror writer? If so, what draws you to the genre?

CP: That's a good one. The fact is, I didn't even know The 49th Day was a horror script when I wrote it. I had it pegged as a supernatural thriller. But then it won a couple of contests in the horror division, and I thought, really, it's horror? Obviously, I'm not a big genre guy. I simply strive to write compelling, passionate stories that illuminate the inner life of the human spirit, stories that can have a positive impact on how people lead their lives.

MovieBytes: What is the BloodList? How are the scripts selected?

CP: The BloodList is an annual list highlighting the top 13 most well-liked, unproduced, dark genre scripts of the year. It was created in 2009 by literary manager Kailey Marsh, and only executives can vote on the list. It's become a resource for producers looking for material, and lots of films written by BloodList Alumni have already been made. Writers can submit scripts for inclusion on the list. In my case, I received a call from Kailey telling me The 49th Day had been chosen. I was delighted with the news, and the script has received a burst of attention since its selection.

MovieBytes: You were also recently named the winner of the ScreenCraft Horror Competition. How was that experience?

CP: Winning the Grand Prize in the ScreenCraft Horror Competition has been a great boon for me. Cameron Cubbison and John Rhodes have both been actively seeking out opportunities on my behalf, and I've been receiving script requests daily. The contest has dramatically increased the script's visibility and created quite a buzz.

MovieBytes: Do you consider contests a worthwhile way to promote yourself and your screenplays?

CP: I've won or placed in over 40 screenwriting contests over the years, and these contests have proven to be the single greatest momentum builders of my career. Winning contests gives my scripts instant cachet, traction, and trajectory. I've come close to having The 49th Day and other scripts I've written go into production, and I'm hoping that any day now I'll get my chance.

MovieBytes: Do you have representation?

CP: I'm eagerly seeking representation. I've recently had a nibble or two, but there's nothing set in stone. Though I've had reps in the past, none of them have proven to be a good fit. What I'm searching for is a strong, hungry ally who's really fired up, someone who will work as hard to promote my scripts as I work in writing them. Going forward, besides marketing my script through the rep I hope to land, I plan to maintain an active presence on various screenwriter's websites, like MovieBytes, InkTip, and ISA - and I've just launched my own website as well: www.craigpeters.info.

MovieBytes: Final thoughts? Words of wisdom for other writers?

CP: As every writer knows, this is a tough business, and sometimes you can feel smacked down and dispirited. At times like that, I remember the words of Muhammad Ali. "Inside of a ring or out, ain't nothing wrong with going down. It's staying down that's wrong." I'd say to other writers that if they truly feel they have stories to tell, be relentless. Get back on your feet and keep slugging.