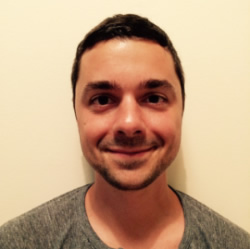 Last year I submitted my script to the Cinestory Foundation's 2015 Screenwriting Contest at the last minute, on the last day of their Extended Late Deadline. A friend/mentor of mine gave me just the nudge I needed. After reading up on CineStory I did a quick polish of my script and sent it off. A few months later I found out that I had won.

Originally, I didn't even know there was a cash prize (a rather sizable prize, actually). I only found out about it a few hours before the wonderful folks at CineStory presented it to me. Most people would infer from this that I am not the smartest bulb in the, uh… bulb box. Why would you enter a competition without knowing the reward? I assumed I already knew what the prize was: an all-expense paid, four day writer's retreat in Idyllwild, CA, where 24 other finalists all convened with a group of mentors to talk about their work. That's right: 25 of us. Which essentially makes 25 winners. I had never heard of anything like this before. This was the reason I decided to enter the CineStory Screenwriting Contest in the first place.

The retreat was a writers' oasis where we discussed screenwriting, filmmaking, navigating the murky depths of Hollywood meetings ...

The retreat was a writers' oasis where we discussed screenwriting, filmmaking, navigating the murky depths of Hollywood meetings and just enjoyed being around like-minded people who are all in pursuit of the same thing: good stories. You know those conversations that you have with friends who are also film fanatics made up entirely of quoting dialogue from your favorite movies? It was 4 days of that. You're having so much fun that you don't realize you are making connections with people in the industry you so desperately want to work in. And let's be honest, when you're a writer, used to being in a little room with your laptop and talking to yourself due to too much caffeine or alcohol or chocolate (not judging), being a social animal doesn't always come naturally.

I came away feeling energized and inspired by everyone who mentored me and the rest of my fellow writers. I had pages of notes to make my winning script even better. Since then I have been working with two of my mentors from the retreat to write new projects or get my work into the right hands. I've stayed in touch with many of the writers I connected with at the retreat. We've formed a supportive community (online and in LA). And going forward that's what I look forward to the most from CineStory. I know I can call up any of the mentors and ask them for advice. When my next script is done, I can send it to people I've met through the CineStory family: writers, producers, managers, etc. I believe they want to help in whatever way they can to further my career.

They are currently accepting submissions for the FEATURE RETREAT 2016. My advice? Polish that script up and send it out.