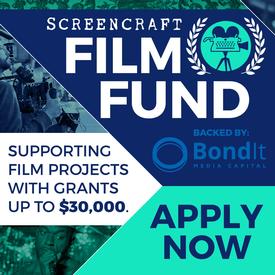 In partnership with BondIt Media Capital, a film & media fund based in Beverly Hills, ScreenCraft is offering two production grants per year to talented filmmakers for narrative features, short films and TV pilot series scripts and documentaries that display originality, vision & exceptional potential. Grant amounts will vary from $10,000 to $30,000 depending on the scale and merit of each project. This program includes creative development from the ScreenCraft team and production guidance and resources from BondIt Media Capital and Buffalo 8 Productions.

Semifinalists have been announced for ScreenCraft's 2018 Spring Film Fund.

A Girl from Mogadishu, by Mary McGuckian
A Journey of Winter and Summer, by Amie Williams
A Life, by Zachary Beck
A Little Fellow, by Anna Laclergue
A Woman’s Work, by Yu Gu
Air, by J.R. Wicker & Joey Sisson
Amal, by Dilek  Ince
Amendment, by Belinda Gosbee
American Zero, by Dillon Tucker
Anomaly, by Chris Butler
Another Day in Baghdad, by Maysoon Pachachi & Irada Al Jabbouri
Awake, by Andrew Palmer
Barbie Girl, by Kim Booker
BB, by Melody Herr
Bingo, by Annakate Chappell
Birth/Rebirth, by Laura Moss
Black Hands in Red Lands, by Larry Baer
Blank Shores, by Alex Kyrou
Blink, by Kyle Lavore & Amy Fruchtman
Body and Son, by Christopher Hamilton
Bon Fet, by Emily Marquet
Can You Take My Picture, by Cameron Thrower
Catfight, by Ariel Sinelnikoff
Cheer Up, Charlie, by Kara Grace Miller & Anthony Holiday
Cherry Blossoms in March, by Riley Rheyan
Como se Dice, by Gwendolyn Hulet
Complimentary Colors, by Alyssa Haddad
Crane, by Amanda Dreschler
Cupcake, by Obiageli Odimegwu
Dancing with Natalia, by Susy Pena
Darya, by Alies Sluiter
Dead Shelter, by Tim Hewitt
Demon’s Vale, by Zebulon Eckles
Devils from the Goats, by Christina Masciotti
Dissonance, by Jonathan Everett
Duty Free, by Sian-Pierre Regis
El, by Luke Howe
El Pueblo Unido (The People United), by Jonathan Machado
Elegy, by John Flynn
End Zone, by Guy Kozak
Fender Bender, by Jeremy Foley & Sara O’Reilly
First Words, by Meegan May
Fish & Chip, by Hank Isaac
Good Night, Moon, by Saaret Yoseph
Gramercy, by Jamil McGinnis & Pat Heywood
Greetings from Nowhere, by Lindsay Bruno
Hells Canyon, by Jo Hannah Afton
Hiking Buddies, by Megan Morrison
Honor Thy Father, by Will Goodfellow
How Does It Start?, by Matt Miller
How to Have an American Baby, by Leslie Tai
Ice Cream, by Ora Yashar
Imagine: “Epitaph for Eleanor Rigby”, by Thomas O’Connor
Inez and Doug and Kira, by Julia Kots
Inhuman, by Steffan Delpiano
Into The Dark, by Randy  Kornfield
Javelin, by Cinqu&eacute; Lee
Jon the Seagull, by Caleb Scott
Kaylee, Age 8, by Molly Coffee & Charles Thomas
Lily, by Philip Staal
Little Chief, by Erica Tremblay
Little Lying Wild, by Samantha Aldana & Bryce  Parsons-Twesten
Lotus & Jazmine, by Afnan Linjawi
Love. Hate. Repeat, by Francesca Fowler
Morning Glory, by William Winston
My G., by Miguel  Ortiz
My Secret Country, by Marlo McKenzie
My Week With Maisy, by Mark Oxtoby
Number One, by Mohammad Homouda
Odium — A Requiem For Love, by Annika Pampel
Old Dog Dream, by Colt Sheldon
One Last Run, by Daniel Grasskamp
Orientation, by Eve Symington
Pedestrian (Rahadari), by Shahir Daud
Progeny, by Anthony Weintraub
Remember the Alamo, by Andrew van Baal
Rocking Horses, by Rachel Barth
Rocksteady, by Jed Goldstein
Rooster, by Kyle Rynicki
Sacrifice Zones: The 48217, by Ben Corona
Scout, by Samuel  Goodwin
Searching for Justice, by Raza Rizvi
Shelly, by Gillian Kinser
Showpony, by Scott Kalberer
Sila, by Mischa Hedges
Storage, by Wendy Stetson
Tackling Homelessness:  A Hard Look at Why We Fail the Homeless Community, by Robert Fisher
The Campaign of Miner Bo, by Todd Drezner
The Condor & The Eagle, by Clement Guerra
The Confessions of Billie the Kid, by Kyle D’Odorico
The Dead Ones, by Fred Armesto
The Descendants, by Nicole Collins
The Devil’s Crown, by Jessica Valentine & Richard Valentine
The Girl With Seven Names, by Madeleine Gavin
The Handy Man, by Nicholas  Clifford
The Hard Song, by Christen Kimbell
The History of White People in America, by Jonathan Halperin
The House on Carter Road, by Shawn Gerrard
The Institution, by Christopher Crane
The Loneliest Whale, by Brad Klipfel
The Love Bugs, by Allison Otto
The Molok, by Xander Chauncey & Sam Wilson
The Offshore Pirate, by Ryan M. Moore
The Perpetrator, by Jessica  Franz
The Scarlet Pimpernel, by David Ruben
The Snow Panda, by Michelle Calderon
The Specter, by Adam Thede
The Speed of Light, by Jorge Barboza
The Thorns In Our Side, by Tony Gapastione
The Three Bobs, by Roxanne Marciniak
The Village That Once Was, by Tyrrell Shaffner
The Violinist, by Michael Lavers
The Wind, by Janae Green & Maria Mitchell
Together, by Ryan Still
Transfer, by Sage Mears
Transistor Radio, by Georgia Bloo
Tucumcari, by Kristin Goodman
Tumbleweed, by Christopher Seehase
Twister, by Evan Kelman
Violence, by Ian Stoker-Long
When The Desert Was Home, by Corey Deshon
Wingmen, by Nicole Emanuele