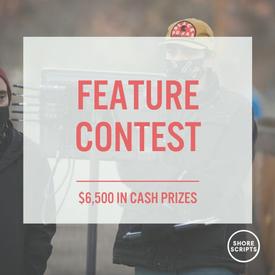 PLUS, our Grand Prize Winner will also get the choice of receiving a FREE Pass to one of these film festivals:

Benjamin Feuer, Brian Golden, and Kate Shenton have been named the 1st Place Winners of the Feature, 1-hour and 1/2-hour TV categories of the 2019 Shore Scripts Screenwriting Competition.

A surly, pregnant teenager reluctantly agrees to drive an elderly widower to Cornwall, where he plans to end his life by jumping from the cliffs at Land’s End.

In 1970s Los Angeles, one woman finds herself stuck between the traditions of her Chinese-American family and her new found interest in the world of adult magazines.

A troubled biologist teams up with a grieving migrant to reveal a disturbing eco-terror plot. As the women race to stop the attack, they become targets of a racist war criminal.

5th Place
SON OF A GUN
by Evan Cunningham

Frank Cooper is content to live a quiet life on his Texas homestead with his 10-year-old son, Sam. When a chance meeting with a bounty hunter brings troubles from his mysterious past, Frank decides to meet his problem head-on and takes Sam along on the journey of a lifetime.

In California’s drought-stricken Central Valley, three Mexican-American siblings are forced to confront their complicated history when a controversial public works project pits them on opposite sides of the law.

Fearing an arrest for historic war crimes in Afghanistan, an ex-military interrogator travels back to her seaside home town of Margate, to mend her relationship with her long-estranged son.

A trauma psychotherapist turns memory detective when she suffers a vicious, mysterious attack she cannot remember, and encounters a patient whose trauma resembles her own. With the attacker still out there, and clues deep in the memory of this fellow victim – and others – she sets out on a dangerous quest for justice.

An awkward millennial who can’t reach orgasm embarks on a journey through sex therapy to face her demons and achieve her Big O.

After suffering a nervous breakdown, self-destructive 28-year-old Abby Horne embarks on a hilarious and heartbreaking quest to become the first person on Mars.

Desperate to stop the network from cancelling their once-wildly popular real estate reality show, STAGED, TV’s most famous real-life couple, Ree and Billy Sanders, take matters into their own hands, devising a desperate, twisted scheme to save their TV empire, and bring their show back to its original glory.