Taylor Hopkins was the Grand Prize Winner of the 2019 Creative World Awards for his screenplay, Stagecoach Mary, a true story about a hard-drinking, cigar smoking black woman in Montana in 1885, who uses her six shooter and tough as nails attitude to defend a convent of nuns from the perils of the Wild West. 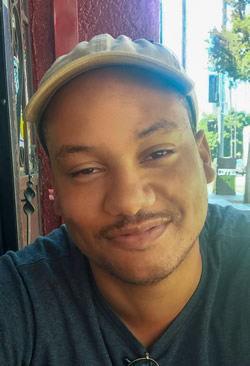 Q: What inspired you to write the feature, STAGECOACH MARY?

A: Writing a feature screenplay can be rewarding and pleasurable. But oftentimes it becomes a tiring process with tedious edits and rewrites that never end. Part of the joy turns into solving the puzzle of the story and ensuring it's firing on all cylinders. It's tough but satisfying work.

So before I select a concept to tackle, I want to make sure it's worth all of that time and energy a.k.a blood, sweat and tears. In this stage of my career, the story I choose only has to answer two questions. 1. Am I passionate about it? 2. Is it commercial in any way?

I like reading scripts on the annual blacklist. I noticed a trend of biopics faring well among the competition. I determined that if I could write a biopic, its chances of appearing on the blacklist were greatly increased, therefore increasing the commercial value. I became passionate about Mary Fields a.k.a. 'Stagecoach Mary' because I saw a lot of parallels in both of our lives. She was a black person surrounded by people who looked nothing like her. They judged her, doubted her, challenged her, attacked her, yet she was always remained true to herself. I deeply related to the character.

Q: What is your background and what initially inspired you to become a screenwriter?

A: I've been writing since I was really young. My mother still hordes comic-books I made when I was seven. I got older but my illustrating skills plateaued. I seriously couldn't draw and still can't. When I switched to writing short stories my father said, "Thank God, because you can not draw!" But soon, movies quickly overtook my interest. I watched Spielberg, Scorsese, Hitchcock, Tarantino, Coppola, Kubrick and was obsessed by their genius. I showed a little interest to my father and he bought me screenwriting books and screenplays. I started devouring them around age fourteen and have been on the journey since. The form of screenplay writing allured me because of the perspective. In novels, writers can blatantly describe character's thoughts and emotions. In reality, people don't have that luxury. I like the challenge screenplays offer of presenting characters and purely having their actions dictate how audiences perceive them.

Q: Is this your first script or one of a few that you have written? And how do you typically choose your subject matter?

A: This is the first script I've ever written and it won the Grand Prize Award at CWA. Next question!

Just kidding. I used to be very reticent about revealing the number of feature scripts I've finished. People normally assume the more you've written the better you are, which isn't the case. When I was younger I churned out screenplays without truly improving my craft. My skill level stalled before I really began focusing on the minor details.

I started when I was young, but I believe the current number stands at around twenty completed features (only six of which I believe are high quality). Along with that, four one-hour dramas and around five TV specs of shows.

It's crucial for me to be passionate about the subject matter I select. With that said, it has to be slightly commercial. I've definitely poured hours into projects that were too passion driven. And on the flip side, I've chased commercial ideas that I truly didn't care about and wasted time. I like to think that I've learned the balance between them.

Q: Do you do this full time, or juggle it between other work? If other, how do you manage it all & what words of inspiration do you have for other aspiring screenwriters?

A: Writing full-time has always been my goal, but until then I have to juggle my passion with irritating side hustles. The struggle is real. There have been some devastating lows in between long gaps of acceptable highs. I manage my schedule by promising myself to always make time for writing. I've maintained that philosophy for so long that I'll feel guilty if too much time passes where pages haven't been written. Nearly every day has slots of time to squeeze in writing time. As far as words of inspiration - just keep writing, improving and meeting new people. It's gotta happen eventually.

Q: What is your creative process when writing scripts?

A: My process has changed slowly but surely over the years, but the core of it remains the same. I select a topic I want to write about and then immediately discover the irony of the idea. Every great script (and most stories, period) comes with a heavy dose of irony. In 'Stagecoach Mary' the irony comes from the fact that in an all-white, racist and sexist town, the most well-respected badass happens to be a black woman. From there, the theme comes into play. Theme plays into every aspect of the scenes and characters. I want the story to stage an argument and utilize the characters to pose different sides of the debate. Then I outline the script scene by scene. I've discovered that the more detailed and time spent on the outline, the less rewrites will have to be done afterward.

Q: What was the feeling like winning the Grand Prize Award at CWA & how has it impacted you so far?

A: Winning a competition rewards you a feeling of great validation. You hope you improve after dumping hours upon hours of time into a craft. CWA awarding me Grand Prize Award definitely makes me feel I've upgraded my screenwriting skills. CWA was one of the first competitions to ever place me as a quarterfinalist around six years ago or so. The competition has always had a special place in my heart since then, so it feels even more special that I was able to walk away with the Grand Prize this year. The prize package offered definitely topped my expectations. Also, the prize money didn't hurt!

Q: How important are things like flexibility in rewrites as a screenwriter, networking with other industry professionals, and promoting yourself and craft? Is there a particular path and balance to it all that you personally have found works well for you?

A: Screenwriters in general, but newbie writers in particular, have to be flexible during the rewrite stage. You don't want your vision destroyed, but you also don't want to be so obstinate no one can work with you. Films are a collaborative endeavor. Knowing when to stick to your guns and genuinely compromise shows an admirable trait in the movie-making process.

When I first touched down in Los Angeles, I assumed that eventually my writing would get in the hands of movers and shakers, they'd recognize my talent and throw me offers and job opportunities. I realized very quickly things don't transpire as such. Talent isn't everything. Your scripts have to get into the hands of someone who matters. No one ever "breaks in" by themselves. Somewhere along the line, a person with clout vouches for you and your writing. They gift you the sledgehammer strong enough to break through the door on your own. Many writers are introverted and spend a lot of time by themselves writing. If you want to expose your work you'll have to hit the town and try meeting new people. Industry events, classes, making short films, attending festivals are all ways to meet other professionals. If you're passionate about the craft, I feel that you'll naturally attract other industry professionals just as passionate. With that said, I'm still working on efficiently networking myself. I make a point not to miss out when I discover uniquely cool industry events, whether it be a panel, talk-back, or screening.

Q: What are your plans from here for STAGECOACH MARY? And your other projects? And where do you see your career in five years?

A: Obviously seeing 'Stagecoach Mary' written by Taylor Anthony Hopkins appearing on the big screen would be phenomenal. Currently, the goal remains to put together an outstanding team behind the script to guide it across the finish line. The plan is to continue to use the momentum from CWA's Grand Prize Award and other good news to place the script in more of the right hands.

In the meantime, I feel that the screenplay serves as a great calling card for my talent and voice. I have plenty of other projects that I believe would make awesome movies. Hopefully with 'Stagecoach Mary,' I've proven that besides all of the thrillers I write, I can also seriously tackle a period piece/biopic and produce a high quality result.

In five years, the plan is to be staffed in a writer's room and have a feature film credited as "written by" under my belt.

Q: And any last words for producers out there that may be looking for new material & why they may want to consider STAGECOACH MARY?

A: The script showcases a protagonist rarely written in the film industry. The character of Mary Fields a.k.a. Stagecoach Mary deserves to be on the big screen. Her dynamic personality was groundbreaking for the era and still remains relevant. 'Stagecoach Mary' presents a timely story about a female minority taking a stand against societal pressures. The narrative brings hope and speaks to the untold histories that inform our current reality. I genuinely believe the film has the potential to be a groundbreaking work that centers a marginalized perspective and brings her to the forefront in a refreshingly real, exciting and culturally relevant way.

The script will attract two things for certain: An exciting star who can't resist how amazing of an opportunity it would be to embody such a dynamic real-life legend and a huge diversity of moviegoers wanting to experience her story.