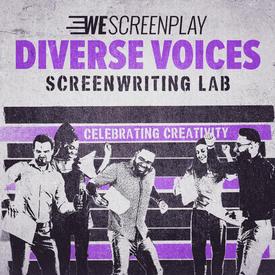 Past winners have signed with Heroes and Villains, Industry Entertainment, and Gotham Group! The contest has helped raise over $12,000 for non-profits.

Kesila Childers
Kesila is the Vice President of Development for Powderkeg, Paul Feig's (ZOEY'S EXTRAORDINARY PLAYLIST, THE OFFICE) digital content company that aims to champion new voices with a commitment to female and LGBTQ creators and filmmakers of color.

Jess Burkle
Jess is a TV writer currently staffed on the CW show IN THE DARK -- and he happens to be blind himself.

Louisa Minghella
Louisa is a literary agent at Blake Friedmann Literary Agency in the UK who focuses on representing diverse talent.

The Grand Prize Winners will be invited for a Diverse Voices Lab in Los Angeles for hands on development with industry executives, WeScreenplay staff, writers, and each other.

An interview with screenwriter J J Hillard regarding the Diverse Voices Writing Competition.

A: The title of my short screenplay is "MY STARDUST" and this is the logline: An astronaut’s elderly widow, watching TV news of an unmanned test flight to Mars, discovers evidence that she may be more than just a viewer of the mission.

A: My short screenplay fit two important criteria for WeScreenplay's Diverse Voices competition, which was "designed to encourage writers who are under-represented in Hollywood..." My main character and I are both over forty!

My Stardust [and another short of mine ("S&M IN SPACE")] won a "platinum award" laurel in the Spring 2016 International Independent Film Awards: http://www.iifilmawards.com/Platinum_Award.html

The results for a few other contests I've entered are still pending.

A: I am very satisfied with the administration of this contest and with the direct communication (email and phone) I've had with Mark Stasenko, WeScreenplay's co-founder and director (and a screenwriter himself).

Cumulative scores (covering 9 aspects of screenplays) were posted by each reader in sequence during the competition and all deadlines were met. The awards for winners are now forthcoming and generous -- including an invitation to a party for all the finalists (WeScreenplay will pick up the drink tab)!!

A: This script has gone through quite a few revisions over the course of the past few years, based on helpful feedback from readers in other contests. This is the first time it has won an award. It was carefully structured and I would estimate the number of drafts it had to be more than a half-dozen.

A: I used Final Draft to write this script, but it's not the latest version of that software. I have used Dramatica Pro in the past for a novel manuscript, but not lately.

A: Like many screenwriters, I try to set aside several hours to write every day, but that ends up including research as well. The good thing is I am now writing full-time as my career.

A: First, I prepare a detailed outline of my entire screenplay, so I'll know where I need to go in each scene. Then I start writing in Act 2 and move onto Act 3. That way I know the critical elements Act 1 will need to include to foreshadow what will be revealed later. This helps me avoid getting stuck in earlier scenes. Also, doing research, reading produced screenplays, and watching films helps me if I need a break from crafting a script.

One of my shorts (BOING!) won a Creative Screenwriting Magazine-sponsored contest at a past Screenwriting Expo. Because of that I was awarded a 2-year fellowship to Jeff Gordon's Writers Boot Camp.

I am rewriting 3 feature screenplays. I have written one teleplay (an episode of The Big Bang Theory) and a half-dozen shorts. I've had a short optioned once (S&M IN SPACE). My crime thriller short (CAGEY) got a Wildsound monthly contest videotaped table read.

A: I don't live in Los Angeles, although I have lived in Long Beach. I'm in Northern California at this time. It will be very easy for me to fly down to L.A. and stay for meetings if/when invited.

A: As well as rewriting the 3 feature screenplays I mentioned, I am working up a premise for a contained horror film centered in Napa Valley. I also want to revisit the novel manuscript I wrote which is the companion piece to a screenplay.

Thanks for making this interview format available.