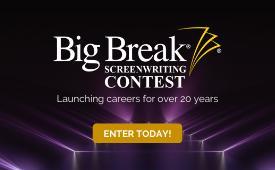 Our objective is to discover talented screenwriters and help them find success in today’s filmmaking market. Show More

Our objective is to discover talented screenwriters and help them find success in today’s filmmaking market. Show Less

A: ''Trigger Mom'' is a Crime/Comedy about an honest Chicago cop who battles to protect three mob witnesses from competing hit men only to discover the most ruthless assassin of them all is ... his own loving mother.

Like many scripts, it's autobiographical. I always had the feeling my mom was hiding something.

A: I entered 16 contests, placed in over half and won three. With hundreds to choose from, picking the right contests for this script was a real challenge. I was attracted to Final Draft by their reputation, judges, industry connections, prizes and clear commitment to promoting new writers.

A: My experience with Final Draft was outstanding. They held the awards ceremony at the beautiful Paley Center for Media in Beverly Hills. It was an amazing, red-carpet event teeming with writers, producers, manager and agents.

The highlight was Robert Towne's induction into the Final Draft Hall of Fame. I got to meet him and shake the hand that wrote the words, ''"Forget it, Jake. It's Chinatown."'' (At least I think he's right-handed.) If you want to see some pictures, check out my facebook page.

We received our prize money right there at the awards event and, the following day, contest director Liz Alani shepherded us through a series of meetings with top industry players. If you're looking for a way to open doors in Hollywood, Final Draft's Big Break is a must-enter.

A: Outlining is essential for me. I start with a logline, then beat out the story, looking for the spine and the theme. Nothing helps me more than knowing what the hell I'm writing about. Once I've got a structure and characters in place, my page work is driven by a checklist of elements aimed at making the script a page-turner.

And, I always remember a tip from a screenwriter friend who emphasizes the importance of constantly challenging the protagonist. He says if you do it right, your main character should want to hunt you down and beat the crap out of you for making his life so miserable.

A: I've always used Final Draft. There's nothing I've ever needed that Final Draft couldn't do. I'm also a big fan of Blake Snyder's "Save the Cat" software. For me, there isn't an easier way to outline, keep story notes, color code scenes, track set-ups and pay-offs and even sketch out the first-draft script pages.

A: Ask my wife and she'll tell you... I'm always writing. My fingers might not be on a keyboard, but my brain is always engaged with the story I'm currently struggling to tell. That can be dangerous when I'm driving.

I used to carry around a pad and make a note every time an idea about the story occurred to me. I don't bother anymore because, truth be told, I can always remember the good ideas and the others are probably best forgotten.

A: A hot shower. For some reason it always clears my head and gets me back on track. In fact, my rule is, ''"Never send out a draft without showering first.''" The shower is where I have those, ''"Ah ha!"'' moments that fix plot holes or explain character motivations.

A: My very first job was as an actor. I was 18-months old. I didn't have a lot of lines in that role, but I think my other experiences as an actor have helped me feel comfortable writing dialogue. I never write a line I wouldn't want to deliver myself.

I also spent quite a few years editing TV shows and documentaries. I think that's the source of my rhythm and timing.

Most of my training as a screenwriter comes from books, seminars and screenwriting courses. I owe a lot to Hal Croasmun and the techniques he teaches at ScreenwritingU.com. For theme, I rely on Stanley Williams' ''"The Moral Premise"'' and Dara Marks' "''Inside Story''." She's also got great ideas about structure. For the nuts and bolts of technique, Karl Iglesias offers wonderful insights in his ''"Writing for Emotional Impact."'' John Truby's analysis of genre elements is unparalleled and Jeffrey Schechter's Four Questions and Hero Archetypes are invaluable.

And, of course, I'd be lost without Blake Snyder's ''"Save the Cat"'' trilogy.

We miss you, Blake.

A: I'm an L.A. native living five miles from the hospital where I was born. My folks ran an acting school here for 40 years, so I've been blessed to be around the industry my whole life. I'm not sure how much it's helped my screenwriting, but it's fun to live in a city where you can run into Cate Blanchett, Timothy Dalton or Kirsten Dunst at the supermarket.

A: I'm in the middle of a Horror spec. And, I'm developing a television pilot because I think some of the best writing today is being done for the small screen. I'm also chewing through another book on screenwriting, reading as many scripts as I can manage, doing coverage and meeting with other writers to see what they're up to. I'm always looking for ways to feed the beast. If I'm lucky, I'll learn something new about the craft of screenwriting every day for the rest of my career.