When ReelHeART International Film Festival arrived On the scene in 2004, we promised to bring you films from hard-working, passionate talented indie filmmakers from around the world.

In 2006, when we introduced the Feature Screenplay Competition, we promised to bring you the same in the form of unproduced screenplays. Every year something exciting happens to out Top 3 Finalists. Will you be one of them...?

Open to all non-optioned scripts. Any Country. Any Genre. Feature-length scripts only.

Script length MUST be between 90 pages-120 pages. Please email us if your script is a few pages longer to discuss.

We will GLADLY ACCEPT PDFs of your screenplay. However, you can send 2 hard copies of your script via MAIL. Hard copy Scripts must be attached with brass brads only.

Please use "WARNER BROTHERS"-style set up in your Final Draft or script writing software. If not using software, please format your script using the guideline for script formatting at American Screenwriters Association and for a formatting sample please use the NICHOLLS FELLOWSHIP SAMPLE, where you can copy and paste the formatted text and use for your own setup.

Top 3 Scripts get a fully rehearsed casted to character Live Read During the ReelHeART Lunch n Learn Series in front of a Live Audience.

An interview with screenwriter Diana Kemp-Jones regarding the ReelHeART Writing Competition. 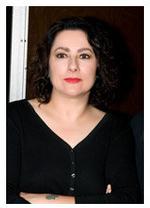 Diana Kemp
Q: What's the title of the script you entered in this contest, and what's it about?

A: Scavengers involves a future where survivors struggle against selective genocide.

A: I was interested in the fact that winning scripts would be stage read. I also wanted another opportunity to visit my home city. This was my first entry into the ReelHeart Festival.

A: Periodic updates kept me informed of the competition progress. I'll be attending the festival in June and am very much looking forward to the reading.

A: No feedback offered in this instance, though there was indication that this was a tight competition.

A: The literary agent that selected the top three winning scripts will be present at the readings, which is a first for me.

A: I've got numerous scripts, short stories and a novel with many more yet to be developed.

A: Several - including a recently optioned horror project.