By Jerry Traynor, Associate Editor, MovieBytes.com
Colin Dalvit & Andrew Lahmann won the 2016 ScreenCraft Action & Thriller Screenplay Contest with their script The Timbermen, an action-horror hybrid about a desperate father and son who join a group of rough lumberjacks on a dangerous mission in the Washington Territory in 1878, and must then fight to survive ferocious monsters deep in the mountains of the Pacific Northwest.

MovieBytes: Your script is described as a character-driven action-horror hybrid, which is an unusual combination. It's a period piece, too. Where did you come up with this idea? 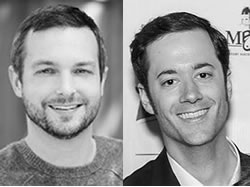 Colin Dalvit & Andrew Lahmann: We were both born and raised in the Pacific Northwest. This story is particularly special to us, as we grew up hunting and camping with our fathers and grandfathers in the beautiful backwoods of the Cascade Mountains... a region of immense cinematic potential, and one steeped in popular campfire folklore.

The Timbermen is essentially the ultimate campfire story. Though the myth of these terrifying woodland creatures is native to our area, we feel the legends have grown diluted over the years as the popular tales have spread worldwide.

We never set out to make a genre hybrid. Our intention was to tell a captivating, character-driven story, while honoring the harrowing origins of the myth.

MovieBytes: How important is the setting to the story?

CD/AL: As writers, we are often told to "write what you know." We knew from the outset that the Pacific Northwest setting would be crucial to putting the reader into the story.

We wanted to tell the story of the "Pacific" Wild West. At the same time Wyatt Earp was riding with Doc Holliday, Western civilization was struggling to tame the fierce frontiers of the Cascade Mountains and the North Pacific coast. It was as far west as you could go. Washington Territory was wild, and full of the promise of prosperity.

Nowadays, it's difficult to imagine cutting down thousand-year-old trees. But during this time, timber companies were stopping at nothing in their race to harvest nature's bounty... corporate-powered Manifest Destiny on a massive scale. Men and women from all over the world were drawn to the Pacific Northwest by the promise of work and the hope of a better life. And work they did, facing tremendous hardships to cut down the ancient forest giants that stretched unbroken from the mountains to the coast. To be a lumberjack was to be at the pinnacle of masculinity; their toughness and camaraderie were legendary. The trees, the characters, the adventures and the dangers were all larger than life.

MovieBytes: What kind of background do you guys have? Did either or both of you go to film school?

CD/AL: Growing up on opposite ends of Washington state, we both independently knew we wanted to make movies as young boys. The passion for telling stories only grew with age, and our determination has never let up.

We met while attending Western Washington University. Although it was not a film school, it had a strong theater department where we took scriptwriting classes and a few acting classes. With the help of supportive staff & administrators, we began designing independent study courses that allowed us to be writing and filming multiple projects, from promotional shorts to narrative features. We were required to evaluate and report on every step of the process, which allowed us to identify our strengths and improve our weaknesses.

MovieBytes: Are commercial considerations part of your writing process?

CD/AL: Absolutely. Our goal is to do this for a living. We believe you can write a good story with commercial appeal. We've been advised by people in the industry to generate material that audiences want to see if we hope to continue a career in the business.

In our writing process, we try to identify marketable concepts, then make it "ours" so that we're able to remain as passionate as possible about a story that will be consuming months of our creative time. No matter what we write, we're always aiming to create something so good it can't be ignored.

Our goal is to do this for a living. We believe you can write a good story with commercial appeal. We've been advised by people in the industry to generate material that audiences want to see if we hope to continue a career in the business.

MovieBytes: As collaborators, how do you decide what you'll write?

CD/AL: Several factors come into play here. The decision on what we elect to write at any given time is usually one or a combination of the following:

MovieBytes: What is your collaborative process like? Do you write in the same room, or simultaneously online? Or do you pass completed pages back-and-forth? Any special software?

CD/AL: Being producers and directors as well, we've certainly learned the value of good collaboration. We recognize that we each have our strengths and weaknesses - when we work together, we fill in those gaps and become a strong writing team.

Disagreements are never personal. We both greatly respect each other's instincts and creative ideas. We enjoy having in-depth discussions about the characters and direction to take each story. We never push ahead without coming to an agreement on the best course of action. We know the script will benefit greatly as a result of our combined strengths.

The first thing we do is agree on a general concept. Sometimes a lot of research is done before we start populating the story with characters. We make detailed and thorough character bios. This may consist of pages of notes about their past, present and hopes for the future. We also create comprehensive timelines with scenes using note cards and bulletin boards. This helps us to see the "cliff notes" of the film, and identify points where the story may lag or need additional support. We then block out the scenes down to the estimated page number of each. That way, we can easily assign scenes - I.E. - "you can take scene 12, it has to be seven pages. It features these characters, and they should be doing X". Once we've done all this work, it feels like the script almost writes itself.

We try to make sure that each character has a clear motive that fits into the arc of the whole story. Sometimes we discover new directions within this framework; we know our characters so well by this point that they can lead us down new paths. That's always fun and exciting.

Once we have locked down our characters and blocked out the scenes, we begin writing. Since we have learned our characters and plot points so well together, we each take scenes and write for a few hours on separate computers. We then swap places, read and take notes on each other's scenes, then sit down together and place the scenes into the actual script while fine-tuning each one together.

Eventually, all the scenes will be written and in place, and we can start revising the draft as a whole. At that point, we're both in front of one computer, going through the script scene-by-scene.

With regard to software, everyone seems to have their weapon of choice. We've had great experience with Scrivener for the past five years. We've become very comfortable and efficient with this tool and its various features. It works well for our style of collaboration, so we imagine we'll stick with it.

MovieBytes: What do you like about collaboration? What parts of the process are challenging?

CD/AL: Teamwork can be extremely beneficial when crafting a script. During the early stages of writing The Timbermen, we even joined forces with another writer in our hometown. Ben Eisner, a masterful storyteller and good friend, came on board and helped us find the foundations of the story. It was an incredible experience... three writers who had an equal respect for what the others brought to the process - three perspectives on the same story. It's these different ideas and outlooks that can make a collaboration so fruitful.

The challenge can be finding a consensus and sticking to it. If everyone is respectful of each other's talents and opinions, a unity on the best course for the story can be reached. What's best for the story should be paramount in everyone's mind.

MovieBytes: Do you enter a lot of screenplay contests? What made you choose the ScreenCraft Action/Thriller contest in particular?

CD/AL: After we had a couple scripts that we felt were ready, we did a quick Google search of well-regarded screenplay contests and found ScreenCraft at the top of the list, especially for genre contests. So far, we've only entered ScreenCraft contests. Two scripts that we entered into the 2016 ScreenCraft Horror contest made it to the semifinals, which was encouraging.

MovieBytes: Have you guys written other scripts? Do you specialize in action and/or horror?

We did a quick Google search of well-regarded screenplay contests and found ScreenCraft at the top of the list, especially for genre contests.

CD/AL: Yes, we've written a couple other scripts in the action/thriller/horror arena. Although we love these genres, we also have several strong concepts across all genres that are primed for feature length or long form TV. We're just waiting for the right time to go after them. In the meantime, we plan to keep our focus on horror and adventure films.

MovieBytes: You guys have a Bellingham, Washington-based production company called P-51 Pictures. Do you plan to produce and/or direct this project yourselves? Or are you planning to sell the screenplay?

CD/AL: We created P-51 Pictures to assemble talented artists and produce several different types of projects that mean a lot to us. We were very fortunate to have our recent feature documentary, Out of Nothing, picked up for international and domestic distribution by Studio Canal, ESPN and Uncork'd Entertainment. It has been released in Europe, Germany & Australia, and hits USA theaters this summer. We're currently producing another new feature doc through the P-51 banner with the same amazing people who worked on Out of Nothing.

We would love to produce/direct The Timbermen. However, we do recognize that it would be a production on much larger scale than our past projects. We're a relatively young company, and would be extremely excited to work as individuals with a production house or studio that is much more equipped to tackle a film on this scale.

MovieBytes: Do you think it's an advantage or a disadvantage to live outside of Los Angeles? Do you ever plan to re-locate?

CD/AL: While we were sophomores in college, we considered transferring to a few film schools in LA, but decided to remain in Washington state. Not living near Hollywood of course creates its own challenges, but it comes with many positive attributes as well. We had to maverick new ways of creating our own opportunities. We had to learn by doing in a film community that is rich and growing. We are also grateful to have family & friends who've been tremendously supportive.

We travel to LA quite a bit, and are ready to move there if the need arises. From Bellingham, we're able to fly down to LAX faster than it takes many people to drive across Los Angeles during rush hour.

We recognize LA is the hub of the industry, and we love the rich film history. Some of our closest friends live in Hollywood, and we have great admiration and respect for several people in the industry who've been extremely generous to us over the years. Ultimately, we're ready to go wherever the work takes us. At the end of the day, we just want to be telling great stories.