Friends and writing partners Colette Freedman and Brooke Purdy scored an important breakthrough earlier this month when they were named the Grand Prize Winners of the 2016 Creative World Awards for their post-apocalyptic screenplay, The Last Book Store. We caught up with the two prolific writers to ask about their partnership, their process, and their future. 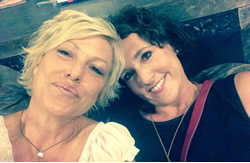 MovieBytes: Give us the pitch for your screenplay ... what's it about?

Colette Freedman and Brooke Purdy: It's the story of Jack, a 12 year old living in the post-apocalyptic world. When his mother falls ill due to a mysterious disease called "The Bleeds", Jack must employ the help of his best friends and little sister Beckett to search for the rumored "Last Bookstore" to try and gain the necessary knowledge to mimic past pharmaceuticals and save his mother. To get there they must travel through a territory ruled by Xander, the demented leader of the "Blighters", a ruthless band of psychotics. They must also face the "Unders"- a group of women who have created an underground society where they are harboring Xander's daughter, Nyx. As the kids find themselves in the middle of a war, they must try and save both themselves and Nyx - while racing the clock to save Jack's mother. It's "The Goonies" meets "Stand By Me" with a sprinkling of "Mad Max" thrown into the mix.

MovieBytes: Where did you come up with the story?

The industry is a beast and we are two unrepresented writers living in Burbank. Any help cracking that nut is always welcome and appreciated. We have entered other contests and "The Last Bookstore" has performed really well.

Brooke Purdy: My 12 year old son Max, an avid reader, asked me to write a movie for him. Something that he would want to see. He has pretty sophisticated tastes but is also in this odd "tween" grouping where movies for his demographic are either too gory or too young. He was our constant reference throughout the writing.

MovieBytes: How long have you two been writing together? What's your process? Do you work together in the same room, or swap pages?

BP: Colette and I began writing together on a feature "Quality Problems" about two years ago. We worked so well that, once finished, we rolled right into the next two scripts. "Bookstore" was one of them. Depending on whose idea we are working on, one of us will write pages then send to the other for "tuning up", structure help, and elaboration. It's an amazing marriage of creativity. Colette is an insanely prolific writer, whereas I tend to "ruminate" a bit too much on story. Her drive compels me to keep up and stop being so precious about every last detail. She's also a crazy fast (and violent) typist. Dometimes I can feel her keyboard screaming.

Colette Freedman: Brooke could be the funniest person I know and is the only person I've ever met who can work as fast as I can. I've had loads of writing partners over the years but this partnership is truly the most magical. We 'get' each other's sensibilities and although we'll have drag out fights over one sentence, the outcome tends to be something incredibly special. It's really a matter of spitting out ideas, figuring out which one of us is going to take the lead on which idea and going for it ... with several long marinating bike rides thrown into the mix. It is definitely the most fun I've ever had writing.

MovieBytes: What are your respective backgrounds? Have you studied screenwriting? If so, where, and with whom?

BP: I have been writing since middle school. Books and writing were my favorite escapes. I had amazing teachers and encouragement along the way. I entered NYU Tisch in their dramatic writing program in 1989. There, I began with stories and plays. I studied with Dick Beebe there and he was remarkably cinematic. He first encouraged me to expand my work into screenplays. I never looked back and transferred to the Film & Television Directing Program there the next year. Later, when marriage, kids and life had me somewhat creatively "stalled," I went to Kristen Hanngi who helped get me "unstuck".

CF: I started in this business as an actor and when I got insanely frustrated with the lack of dynamic parts for women, I started to write them myself. I started as a playwright and in the last few years have transitioned into novels and screenplays.

MovieBytes: How long did it take to write the script? How many drafts?

BP and CF: About six weeks. We processed much of it on long bike rides, which was a great side bonus. With two writers, we are constantly rewriting, so our "first draft" tends to be really our fifth or sixth. Once we were finished, we sent it out to a few very trusted readers, and employed the notes we liked.

MovieBytes: What made you enter the Creative World Awards? Have you entered any other contests?

BP and CF: We liked that there were a lot of reviews and emphasis on promoting the writers. The industry is a beast and we are two unrepresented writers living in Burbank. Any help cracking that nut is always welcome and appreciated. We have entered other contests and "The Last Bookstore" has performed really well. We always knew it was a special script but it wasn't until CWA that we really were able to shout it from the rooftops. It is a game-changer as far as our bankability and the script's draw.

MovieBytes: Where do you go from here? Do you have representation? How do you plan to market the script?

BP and CF: We are currently in post production with a film we did last year, from a script I wrote, "Quality Problems". We hope to co-ordinate any interest in "Bookstore" with the promotion of that and its festival runs. No, we don't have representation as a team and we are in need of it now more than ever. We have two other scripts that are starting to get a lot of attention -- "Joint Venture" - is the true story of an all female cannabis delivery service brought down in a sting operation, and "Scattering Rachel" is about a group of women who take their niece cross country to scatter their sister's ashes. We also have two more comedies in the works which we plan to finish by the end of the year - our plate is FULL and we are ready to let some savvy, believer take a bite out of it!