Scriptapalooza was founded in 1998 with the goal of helping as many writers as possible through the competition. We have over 90 production companies, agents and managers reading all the entered scripts. (A complete list of participants is on Scriptapalooza's website.)

We actively push the Semifinalists, Finalists, Runners-Up and Winners for a full year with the intention of creating opportunities for the writers. We are a hands on competition because we feel it is important to continue supporting the top scripts beyond the cash and prizes. No other competition in the world does that.

We are proud to present the competition with Write Brothers, a company that not only provides the necessary tools for writing but is an advocate and true supporter of emerging writers. Show More

Scriptapalooza was founded in 1998 with the goal of helping as many writers as possible through the competition. We have over 90 production companies, agents and managers reading all the entered scripts. (A complete list of participants is on Scriptapalooza's website.)

We actively push the Semifinalists, Finalists, Runners-Up and Winners for a full year with the intention of creating opportunities for the writers. We are a hands on competition because we feel it is important to continue supporting the top scripts beyond the cash and prizes. No other competition in the world does that.

We are proud to present the competition with Write Brothers, a company that not only provides the necessary tools for writing but is an advocate and true supporter of emerging writers.

We are endorsed by Robert McKee, author of STORY.

We now accept SHORT screenplays, under 50 pages in length.

This competition is open to any writer, 18 or older without produced feature film credits. Entering the competition constitutes permission to use the winners' names and likenesses for publicity and promotions with no additional compensation. We reserve the right to publicize and promote any and all progress, development and success of the entered scripts.

Interview with Mark Andrushko: An Inside Look at the Scriptapalooza Screenplay Competition 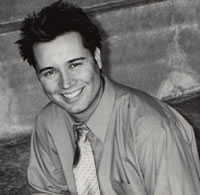 Originally from Chicago, Mark packed his bags up 20 years ago and headed to Hollywood to become the next Brad Pitt, but the acting didn't work out, but staying in the Hollywood machine did. Along with co-founder, Genevieve Cibor, also a Chicago native, they changed the way screenwriting competitions were ran. Listing the actual names and companies of their contacts on Scriptapalooza's website instead of the mysterious "industry professionals" created a wave through the world of screenwriting competitions. Others soon followed suit but Scriptapalooza was ahead of the pack by truly caring for the writers interest.

In 1998, with very few contacts, Mark started cold-calling producers around LA and pitching the winners from Scriptapalooza. Soon, the word spread around town and Mark was courted by agents, managers and producers all looking for scripts. The word spread within the writing community and by its third year Scriptapalooza landed a partnership with Hollywood screenwriting software giant Write Brothers, Inc. creators of the top selling Movie Magic series, and Screenwriter 2000.

Mark attended DePaul University in Lincoln Park and did a brief stint at the Chicago Board of Trade. Also, he was student of Second City, where his acting bug began. First generation Ukrainian, his parents born in Ukraine, came to America for a better life...and were hoping that Mark would follow in his father's footsteps into the banking world, instead Mark headed to Hollywood, where the top currency is great writers.

Barri Evins: Tell us a little about the origins of Scriptapalooza. And where did the wacky but wonderful name come from?

Mark Andrushko: Scriptapalooza was born when 2 writers and myself were sitting around a table discussing screenplay competitions and how bad they were. The overall complaint was you never knew who was reading your script and if they were qualified or not. So, we looked at each other and said, let's change this, let's start naming names and so we did, we started naming the producers that would be reading the scripts. That kinda changed everything at that time (14 years ago)&no one was doing that. The name Scriptapalooza was thought of by my partner Genevieve Cibor&.we were looking for a name that was unforgettable, unique and meant power, I think we got it.

BE: Scriptapalooza has become a very well known contest. How many submissions do you anticipate this, your 14th year?

MA: We are always ready for the unexpected. We have over 90 producers waiting this year to read all the entries, so we are expecting atleast 4000 entries.

BE: Here's where I typically ask about readers, but Holy Cow! Scriptapalooza doesn't hire readers at all. NO READERS! Tell us who's reading all those screenplays?

MA: Well we don't believe in readers because readers can't do anything with your script. All the reading at Scriptapalooza is done by producers, managers and agents. We go right to the source, that being a producer, manager or agent, these are the people that can set-up a meeting, option your script, take it to the studio or outright buy it. Why waste your time and money sending your script to a competition that has regular people reading it and worse yet, getting feedback from a paid reader. This reader is not qualified or has any power/connections to get your script into the right hands. A lot of writers want feedback when they enter the competition but be careful, getting feedback from just anyone is pointless, getting feedback from Scriptapalooza is priceless.

BE: What's the judging process?

MA: When your script arrives to our office, it is numbered and then entered into our database and within 2-3 days it is then sent to a producer, manager or agent. Each judge receives 50 scripts and has 4-5 months to do all the reading. We have roughly about 90 producers, managers and agents onboard reading every year. (please check our Judges page for the current list) Scriptapalooza pre-screens each producer, manager and agent and makes sure that they are legitimate, associated with a studio or have extensive credits. This pre-screening benefits you the writer, making sure we have the best producers, managers and agents onboard. Also, each producer, manager and agent can request certain genres and we make sure that we accommodate them with the exact genre they request. The judging process is anonymous. When we receive your script we number it and the judge will only know the title of the script and number. After all the reading is done by the producers, managers and agents the judges then email us the titles of the scripts they think should move forward to the next round. Then Scriptapalooza re-reads all the recommended scripts and decides who makes Quarterfinalist, Semifinalist, Finalist, Runner-Up and Winners.

BE: You have a very different take on prizes. It's seems the real prize here is connections. Drop some names!

MA: Yes we do have a $10,000 Grand Prize here at Scriptapalooza but writers should really care more about the actual connections that we have and we have lots of them. Just to name a few: BenderSpink, Lawrence Bender Productions, Samuel Goldwyn Films and Lawrence Mark Productions. Please visit our website where we list all the producers, their titles and company names.

BE: What motivated you to create seven special genre categories and prizes for 2012?

MA: It's a way for us to reward the best 'Genres' in the competition and really it's to give out more cash prizes to writers.

BE: The website says that Scriptapalooza will "promote, pitch, push" the TOP 100. That's right, top one hundred - not a typo! What does that entail?

MA: After we announce the Semifinalists we promote and pitch them for an entire year. I don't think it's that crazy, that's our job, that's what a competition should be doing. These 100 scripts are all great, any of them can be made into a movie or at least get the writer a meeting with a producer and the writer can show them what else he/she has to offer.

Here's how the process works: After we annouce the winners, we literally will call and pitch the TOP 100 to all of our contacts, that's about 125 producers. They tell us what they are looking for and we go thru the list/loglines of the TOP 100 and get the right script to the right producer. It's a win/win situation.

If a competition that you are going to enter doesn't do that, don't enter it. Plain and simple.

Entering a screenplay competition isn't about the Grand Prize, that's a long shot, go for the connections and what they can do with your script.

BE: You're offering feedback for $75? That's incredible. What's the scoop?

MA: Yes if you enter the competition, you can at the same time as applying, order coverage on your script for $75.

This gives you the advantage of receiving detailed notes on your script in these categories:

MA: There are so many success stories&after 13 years I'd have to say this one: Barbara Schwartz entered our TV competition and after placing in the TOP 3, we got her script to Klasky-Csupo and they loved it&so they hired her to write an episode for RUGRATS and then it won a Daytime Emmy. She called me and thanked me and couldn't believe she was staring at an EMMY on her fireplace.

BE: What's new at Scriptapalooza?

MA: Tons of changes! A brand new website has been designed and we have a commercial being shot on Scriptapalooza and should be ready in the next few weeks. The best way to keep updated on Scriptapalooza is thru Facebook, where we post daily news and videos.

BE: What's the single question about Scriptapalooza you're asked most often?