My Name is 'Err': A Screenwriters Journey

It was a blisteringly hot day in Hollywood. My writing partner and I had been worn down by a punishing heatwave that pushed temperatures up to a hideous 120 degrees. As we both came from Manchester, England - a city renowned for precipitation in a country where summer just means that the rain gets warmer - for us this was the equivalent to walking on the planet Mercury. If Mercury had been filled with dangerous-looking winos and suicidal motorists. 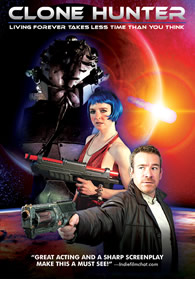 We'd decided to visit an eatery in televisionland known as Roscoe's Chicken and Waffles. The guide book assured us it was a good place to spot the stars. Taking our place in line, we sizzled on the sidewalk like a couple of English poached eggs. After an eternity of this torture, the Emcee asked us what our names were. "Err," I began. But before I could use my best Hugh Grant impression, he disappeared back inside the tempting darkness of the doorway.

"Table for Mister Errrr..." he intoned.

Of course, I couldn't correct him without opening up a whole new can of worms. I might as well have been speaking Portugese for all the good it did. Obviously a case of "You say tomayto, I say tomahto".

We seated ourselves in a booth and soon learned why it was called "chicken and waffles." As I dug into my plate of fried chicken at ten o'clock in the morning, I chose to reflect upon how much this reminded me of our whole screenwriting experience so far.

It seemed a far cry from how I had started out - tinkering away in my bedroom in Manchester, reading as many free articles as I could on a then-fledgling Internet, buying whatever books the local stores had in stock (not many), in my impossible quest to somehow get involved in this magical form of storytelling.

The trip to LA proved eye-opening in more ways than one. As we attended meetings without success, we both sank into a kind of delirious despair. Getting lost on foot in Downtown LA or being rear-ended by the daughter of a movie-star on Sunset Boulevard one Saturday night only added to the sense of unreality. Maybe we were just depressed from days spent foot-slogging through graveyards, staring at epitaphs of our long-departed screen idols.

Two years later, we had still to sell a script. Sure, there had been options, near misses. One producer kept us hanging on for over a year until we got an e-mail saying he had decided to work with Paris Hilton instead.

During this time my writing partner and I went our separate ways. He had a young family, and in the end, I guess he decided that "real life" was more important. I soldiered on, until one day I decided to throw caution to the winds, forget about the market, and write the kind of story I would like to see onscreen. The result was "Ghost Finder", my first option with a big production company in LA.

Still nothing happened. I had listed the script with InkTip.com, and they helped me out with a press release. After a few months, I received a phone call from my soon-to-be agent, who had read several scripts and was sufficiently impressed to sign me up.

She told me she wanted to see more family-friendly stuff. I immediately scoured through what passed for my filing system until I found something that would fit the bill...

Among my various screenplays, I'd written a sci-fi television pilot called "Clonehunter". On a whim, I'd entered it into Scriptapalooza. Although the script didn't place, they were kind enough to provide me feedback. I scanned the feedback, read the script. Hmm, not exactly Orson Welles, but it was salvageable enough.

Over the next few months I rewrote the script, developing themes and characters, until I had an honest-to-goodness movie script. However, experience had taught me that what seems like Shakespeare to you can seem like Dr. Seuss to someone else, so I workshopped the script at zoetrope.com, where other writers could sling mud at it with impunity. Some of those reviews were gut-wrenching in their honesty, but the script came out a lot better for it. More importantly, it was free.

Some of the scenes I'd written would give James Cameron a headache. Pursuits on hoverbikes, floating casinos, talking gorillas - no sane individual would even think of tackling such a project without a studio budget. But it was just crazy enough to succeed. Besides, I loved the character, in particular, David Cain, an intergalactic bounty-hunter who would put Harrison Ford to shame. Not only was Cain's work questionable, but the more we heard about him, the more we suspected that he might not be a very nice guy either. This was a guy who had a history so long he kept secrets from everyone - including his attractive young partner. And he had an intelligent cat.

I wasn't expecting anything, so I was truly surprised when I received an e-mail from director Andrew Bellware. He had seen my script on InkTip and wanted to shoot it, using his production company in New York. I was aghast - did he really think he could do it? Well, it might need a little tweaking. I would never see my floating casino (sob). However it would be an outright sale.

My agent Sue hammered out the agreement and secured me a great deal. Drew then began the looooong process of filmmaking.

Drew kept me informed at every stage of the process. I was flattered that anyone would even care what I thought. Each week he would send me another video of the shoot. Nothing could have prepared me for the sensation of watching the script come alive onscreen. Sometimes I was surprised, sometimes I laughed out loud as an actor said a line in a way I had not expected and turned a boring piece of exposition into something dramatic or even comedic. Most of all, I was amazed that this was actually being pulled off. Even the hoverbike sequence was there! Eat your heart out, Lucas!

The whole experience reminded me that moviemaking is a team sport. Everybody has an input, no matter how small. I felt privileged to have given my contribution. Suddenly, all those years of slaving away over a hot keyboard in a cramped office seemed worthwhile, all those moments of self-doubt as I wondered whether I should be doing this at all dissipated.

Yet, afterwards, here I am again, sat in the same office typing away (admittedly I bought myself a new computer), churning out page after page and knowing that whatever I write will in no way by anything near as good as the movie unfolding in my head - the one nobody will ever see. In a way it's like starting out all over again. And if it ever does get made, it will take a whole bunch of people to make it happen, not just the director and actors, but set decorators, editors, and everyone else down to whoever buys in the sandwiches.

So is it worth it? Of course. Because that's the magic of motion pictures - that someone in a tiny suburb of Manchester, a couple of thousand miles away from New York and even further away from Los Angeles, could one day contribute to a movie. If I've learned one thing on my ragtag journey, it's that you should try everything - every angle, every means at your disposal - to market your script. The Internet has revolutionized the world of media. Contests, feedback sites, listing sites - all of these are equally valid ways to get your script produced.

Who knows, we might be able to meet up one day for chicken and waffles!

Eric Steele is represented by Sue Giordano of the Hudson Agency in New York. Visit the Clonehunter website at http://pandoramachine.com/films/0904/.

When a message of distress reaches the kingdom of the First Realm, the defiant daughter of the king joins her courageous brother on a quest to unite the ‘Trine of Fire’, an alliance between the three Luminary races, to stand against a mysterious menace, threatening to destroy the divine balance of the Twelve Realms.

AT THE MERCY OF FAITH

A 14 year old preacher renounces his faith in God in the wake of a terrifying and traumatic encounter.

NASA sends a young Adam and Eve to the Moon to see if Man can be fruitful and multiply away from Earth.

A grieving, young widow and mother will fight through severe depression and panic attacks to protect her family from a desperate intruder who breaks into her home with a gun, a bullet wound, and an oxy addiction.

Twenty years from now, an FBI agent patrols the social media This pilot streamer has it all.

At the Sound of the Tone

When a strange voice on her answer machine confesses to murder, a frightened young architect enlists an Apache policeman with a troubled history of his own.

Between the Salt and the Sky

A Risk of Exposure

In 1953, a Russian ballet teacher tries to smuggle photos of Stalin's crimes to the United States.

Marry Me. A horror story.

In this one minute screenplay she really screws him .