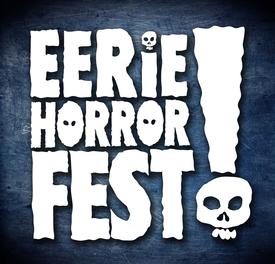 The Eerie Horror Screenplay Competition offers beginning, aspiring and veteran screenwriters in the horror genre a chance to have their work recognized by people in the industry and beyond and to provide recognition and exposure for screenwriters in the horror, science fiction and suspense genres. The finalists and top 3 winning screenplays will be announced on all Eerie Horror Film Festival websites and winner's information will be forwarded to industry professionals for consideration.

Scripts can be uploaded via our Film Freeway account:
https://filmfreeway.com/festival/EerieHorrorFilmFestival

Via Without A Box:
http://www.withoutabox.com/login/3958

Screenplays can also be mailed to us via either of those submission sites. See requirements for mailing scripts below.

Entered script must not be or previously been sold, or produced and must be original work of the author or authors. Multiple authorship is allowed. No corrected pages or additional pages will be accepted after the screenplay has been entered. PLEASE be sure you double check your screenplay for errors, blank pages, etc., before uploading or mailing them to us.If mailing, please enclose TWO (2) copies of your script. ALL Scripts MUST be written in English. Body pages must be correctly numbered. Script title page should contain name of screenplay and the name of the author. Scripts must be in industry standard format and bound with 2 or 3 brads. Must be on white paper.Do not send originals as scripts will not be returned.The Eerie Horror Film Festival is not responsible for screenplays lost, stolen or damaged in transit. Scripts may also be uploaded on line via Film Freeway (preferred) or Without A Box. If entering as a student (ages 10 - 17), a parent or legal guardian must fill out all required paperwork/online forms.You DO NOT have to mail us ANYTHING if uploading (which again is the preferred method of entry).

Sponsor Awards (to be announced), Festival award, Announcement of win to National and International press, notification of finalists and winners to industry contacts.

An interview with screenwriter Michael Gibrall regarding the Eerie Horror Writing Competition.

An FBI agent investigates a NASA hacker, only to find himself thrown into a new reality. Part futuristic, part ancient, the world has been changed into an almost utopian reality. Yet, unexplainable events, conspiracy, and innocence threaten to dismantle all of existence.

A: I wanted to submit to festivals that were genre specific. Eerie Horror Fest accepts sci-fi (which is what my script primarily was), as well as their main genre of horror (which you could argue there was a hint of horror in the script). I have entered other competitions and have been a finalist or semifinalist, at least at this point. More competitions are pending.

A: The competition was done just fine. Emails of semifinaists and finalists were done in a timely fashion. I received an award for Best Feature Screenplay and accepted it on stage. Two of the screenplay judges met me after the awards ceremony to discuss the script.

A: I had worked on this script on and off for years. It was the first feature screenplay I ever wrote, and did so to teach myself how to write a script, as well as tell a story. I didn't write an outline, as I had the idea in my head for years. I revised the script twice after the original draft.

A: Not daily. I go through phases of writing for a while, take a break, and then write some more when I allow myself to regroup.

A: I don't know if I'd say that, but I do step away for a bit, maybe sleep on it, then get back to writing.

A: I've just finished another feature screenplay that I've just begun submitting to competitions and festivals, as well as a teleplay for a children's TV pilot that I have already produced and directed myself. I was also approached by a comedy group in Las Vegas to write a spec script for their award-winning series of shorts. The script is slated to go into production in the Fall of 2011.

A: I live in VA. Not against moving.

A: Just finished a new script and have begun submitting into festivals/competitions.