The Slamdance Screenplay Competition is dedicated to discovering and nurturing emerging screenwriters. Since 1995, the competition has established a strong track record for introducing writers to members of the entertainment industry who have gone on to produce, option and represent submitted work. Like the Film Festival, the Screenplay Competition is a place for new, bold, and raw voices. We are looking for scripts that take risks, refuse compromise, and go places where Hollywood hacks fear to tread.

This year, in addition to our regular prizes, we are introducing the inaugural Slamdance Screenplay Mentorship Award. Slamdance loves finding diamonds in the rough. We read many amazing scripts that— with some polish and finishing—could be finalist contenders and stand a better chance of getting produced. Show More

The Slamdance Screenplay Competition is dedicated to discovering and nurturing emerging screenwriters. Since 1995, the competition has established a strong track record for introducing writers to members of the entertainment industry who have gone on to produce, option and represent submitted work. Like the Film Festival, the Screenplay Competition is a place for new, bold, and raw voices. We are looking for scripts that take risks, refuse compromise, and go places where Hollywood hacks fear to tread.

This year, in addition to our regular prizes, we are introducing the inaugural Slamdance Screenplay Mentorship Award. Slamdance loves finding diamonds in the rough. We read many amazing scripts that— with some polish and finishing—could be finalist contenders and stand a better chance of getting produced. We think it's time to step up and take action on often-heard reader comments like "if only the writer made another pass, cut down 10 pages, fixed a few holes...it'd be a script to die for!" That's why we have decided to launch the Slamdance Screenplay Mentorship Award. In addition to awarding the best screenplays submitted to Slamdance, our readers will nominate unique scripts that, with a little more development and support from a team of alumni, could turn into production ready ventures. From these nominations, we will select the inaugural 2021 Mentorship Award winner who will receive personal mentorship through Slamdance's alumni network and screenwriting consultants.

See website for other TV pilot and short script entry fees. Every entrant will receive short feedback from one of our readers. It will include a genre suggestion, a logline, and a paragraph outlining the strengths and weaknesses of your screenplay. The goal of the feedback is to provide you with short & sweet constructive criticism of your work. A full coverage service is available for an additional fee.

Interview with Peter Baxter: An Inside Look at the Slamdance Screenwriting Competition

Peter Baxter is President/Co-founder of Slamdance and a filmmaker. In 1995 Baxter co-founded Slamdance as an independent alternative to the Sundance Film Festival in Utah. Since its inception, Baxter has been responsible for developing and managing all areas of Slamdance. As Slamdance's President, he has built an organization synonymous with the discovery of emerging talent. Baxter's current film work includes Wild In The Streets, a documentary feature about a community that keeps alive an ancient game of football. He became an American citizen in 2006 and lives in Los Angeles with his wife and two daughters. 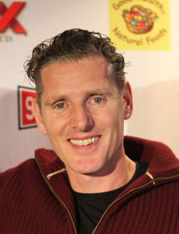 Barri Evins: Tell us about the origin of the Slamdance Writing Contests. It's clear that the original Slamdance philosophy permeates every aspect of the writing contest and directly shapes what makes this contest unique.

Peter Baxter: The Screenplay Competition began soon after the Festival was established. Like the Festival, our goal is to support emerging talent and introduce them to the entertainment industry - to give writers a platform they otherwise might not have. We are a year-round organization run by independent filmmakers who favor unique vision rather than film industry trends. From the beginning this has helped shape the Screenplay Competition. A unique feature of the contest actually has nothing to do with competing. Each and every script receives feedback from our Readers, providing entrants with constructive criticism about their work. As well as finding the winning scripts, cash prizes and the positive attention that goes along with that, our goal is to assist the writer in crafting their work into something that can improve subsequent drafts. Recently, we started a film production prize for the best short screenplay. It's serving the writer well. Last year's winner Dead In The Room written by Marjorie Kaptanoglu premiered at Slamdance and is getting into many other festivals.

BE: How many submissions do you anticipate this, your 16th year?

BE: While most contests have different readers for different rounds, Slamdance takes an atypical approach. What's the Slamdance philosophy on judging and how does the process work?

PB: Our judges are our Readers. No one else is allowed into the process. Like the festival itself, we believe our Competition has to be about creating a level playing field - an artistic democracy if you like - whereby each of our readers has the same vote and say from the outset to deciding the winning scripts. So, if I'm not a Competition Reader I have no say in deciding the finalists or winning work. This process makes most sense to us in supporting emerging writing talent. Our Readers put great dedication and passion into this Competition and I think this collective energy is most important for the entrant. They have the freedom to judge the Competition entirely and doing it any other way would, we feel, undermine what every entrant has to offer.

BE: For me, one fascinating aspect of this contest is that you've carved out a separate category for Horror Scripts. This creates an enormous opportunity for a genre that may face challenges being recognized elsewhere. What is Slamdance's goal here?

PB: Because of Paranormal Activity and other horror films premiering at Slamdance and then doing well commercially, we've become quite well known for this genre and believe it deserves our support in the Screenplay Competition. Horror screenplays often don't get the recognition they deserve, and this genre tends to be overlooked in independent film. Essentially, we believe in supporting all types subject matter and if the writer is passionate about applying their craft in horror we have a dedicated place for it at Slamdance.

BE: Another thing that makes the Slamdance Writing Competition stand out is that EVERYONE who submits receives FREE online feedback. As a mentor of writers, I know that a logline and genre from a reader's point of view is an enormous help in understanding what they've effectively conveyed on the page versus what's in their head. And a few lines of constructive criticism are invaluable. Why does Slamdance go above and beyond? Once you submit, how does Free Feedback work?

PB: Yes, every writer receives basic feedback for their entry. Writers can also opt for in-depth analysis through more extensive - yet economical - online coverage giving insight into the mind of a Reader who reads hundreds of independent screenplays each year. We want to provide value for every entrant. There are so many Competitions and we note their expense. Our goal is to try to help writers advance in all levels of the Competition. Free feedback is quite basic but as you say it does provide an independent point of view that we know is helpful for entrants.

BE: Slamdance offers coverage for an additional fee for contest entrants. Tell us about your intention here and how writers can benefit.

PB: The object of Slamdance's Online Coverage Service is to provide the writer with extensive constructive criticism about their work. The Online Coverage Service includes a brief plot synopsis and then offers an in-depth analysis of the strengths and weaknesses of your screenplay. The Coverage Service also offers the writer some recommendation as to what "the next step" could be with their screenplay and writing. This may address media, films and screenplays, production companies and agencies the writer should be aware of, as well as any words of wisdom from one of our Readers. We offer Standard and Expedited Online Coverage. Standard is available within two months from the time you submit your work and the Expedited is done in twenty-one days.

BE: The prizes given to the top three winners in each category are as unique and Slamdance itself. Beyond cash, which of course is appealing to all struggling writers, what's the goal of the prize package?

PB: Thanks for asking that question because the additional Festival Pass prize helps introduce our writer's to filmmakers and industry members in Park City. This is valuable because not only does the writer have the opportunity to let the film industry know they are an award-winning writer but also they can find out, meet and get to know those that are making independent film. Being in Park City has definitely helped our writer's progress and sometimes forged working relationships. Our entertainment legal services prize from Pierce Law Group is also a valuable "working" prize along with WGA caucus membership from our friends at the WGA - West.

BE: The top three finalists in each category are published in the Slamdance Film Festival program, distributed to industry members at Park City. What kind of industry attention can these writers expect from producers, studios execs, agents, and managers? PB: The desire to now read their work. Many production companies and agents are in touch with us about our winning scripts and writers.

BE: Slamdance continually creates new and innovate ways support emerging talent. This will be the third year you offer the option for the winning Short Screenplay or Webisode script to be produced by Slamdance and premiere at following year's festival. This is a groundbreaking opportunity. How does it work? What have the results for Short Films been thus far?

PB: Slamdance produces the winning short screenplay for the writer. We've been very fortunate with our directors. Last year's winner Dead In The Room was directed by Oscar nominated Adam Pertofsky and Sundance award winning filmmaker Matthew Harrison directed Christopher Hlas' Hey Vendor the year before. After premiering at Slamdance both films are still playing at other festivals. By the way, the writer retains copyright of their original screenplay.

BE: Webisodes really demonstrates that Slamdance looking to the future. What have the results for Webisodes been thus far?

PB: We will find out in September when we announce the winners!

BE: Slamdance has a heck of a lot to brag about. Festival alumni include Steven Soderbergh, Christopher Nolan, Marc Forster and more, helping discover these huge talents and propelling them toward their next films. Slamdance exposure also has helped a great many festival films find theatrical distribution. No one should have to choose a favorite amongst those luminaries, but could you share some favorite Writing Contest winners' success stories?

PB: The one that comes to mind not only demonstrates success but also the importance of how the indie community can work together is The Woodsman by writer/director Nicole Kassell. This screenplay won our competition. Lee Daniels, the future producer then called after an introduction from Slamdance alumni Marc Forster. Over a year later it was made and premiered at Sundance ahead of its theatrical release. Glory.

BE: Slamdance is becoming a label. What will that mean for winning contest writers?

PB: A nicer shovel in the sand pit of life.

BE: What's the single question about the Slamdance Writing Competition you're often asked often that you'd like to answer here?

PB: How do you pull off a large competition like this and yet provide feedback services at the same time? Organization, trust in our Readers and the desire to treat all entrants fairly.

To enter THE SLAMDANCE SCREENPLAY AND TELEPLAY COMPETITION, visit www.slamdance.com.